On Saturday, 13 March, we finally held our annual Life Members and Sponsors Day in conjunction with the long-awaited official opening of our new Hitting Tunnel training facility. It was also the final game for the home and away season for the 1's. This was after rescheduling a couple of times due to COVID-19 restrictions on large gatherings, including the recent snap lockdown. Despite the inclement weather, the umpires gave the game every chance of counting (a win may well have earned our 1's a final berth), but the weather was too persistent. In fact, every game held Saturday was deemed a washout.

Tim Watts MP for Gelibrand was invited to our club to cut the ribbon, with what he remarked were the best scissors he'd ever held. Tim gave our club the necessary endorsement for our application for funding with the Stronger Communities Grant, which was integral to kick-starting the most significant building project our club has seen since our rooms were built in the 1970s. Tim was much relieved he wasn't asked to throw the first pitch. Those honors were given to our major Platinum Sponsor, Mark Agar of BMS Steel. Our other sponsors in attendance were Adam Vickers from Asset Locating Services, Paul Dixon from Scan and Locate, Matt Plummer of MP Earthworks, Scott McKay of Bremac Plumbing, Mick Hurstfield of Victorian Case Management, and Shae and Lee Gill of GPlumb. We thank every one of them greatly for their financial support.

There is a long list of contributors to our Hitting Tunnel who donated their labour, materials, equipment, or completed works at mates rates. Special thanks were given to the self-named 'Old Farts Committee,' along with Mike Gwin. The OF's are all Life members; Ray Baker, Lesley Flower, Laurie Treadwell, John Humphries, Alan Moloney, and Roger Twist. These champions project managed, worked, and morning tea-ed their way through the build during 2020. Seriously a nuclear apocalypse wouldn't have slowed those guys down. All seven were presented with personalised club mugs. Many thanks to Mark Chircop, Andrew Sadler, Dylan Sadler, and Aiden Sadler for organising, cooking, and serving food and beverages on the day.

Please make your way to our photo gallery for a pictorial of what was, despite the washout, a great day.

On behalf of WBC, we would like to thank the following persons and organisations for their contributions to our Hitting Tunnel: 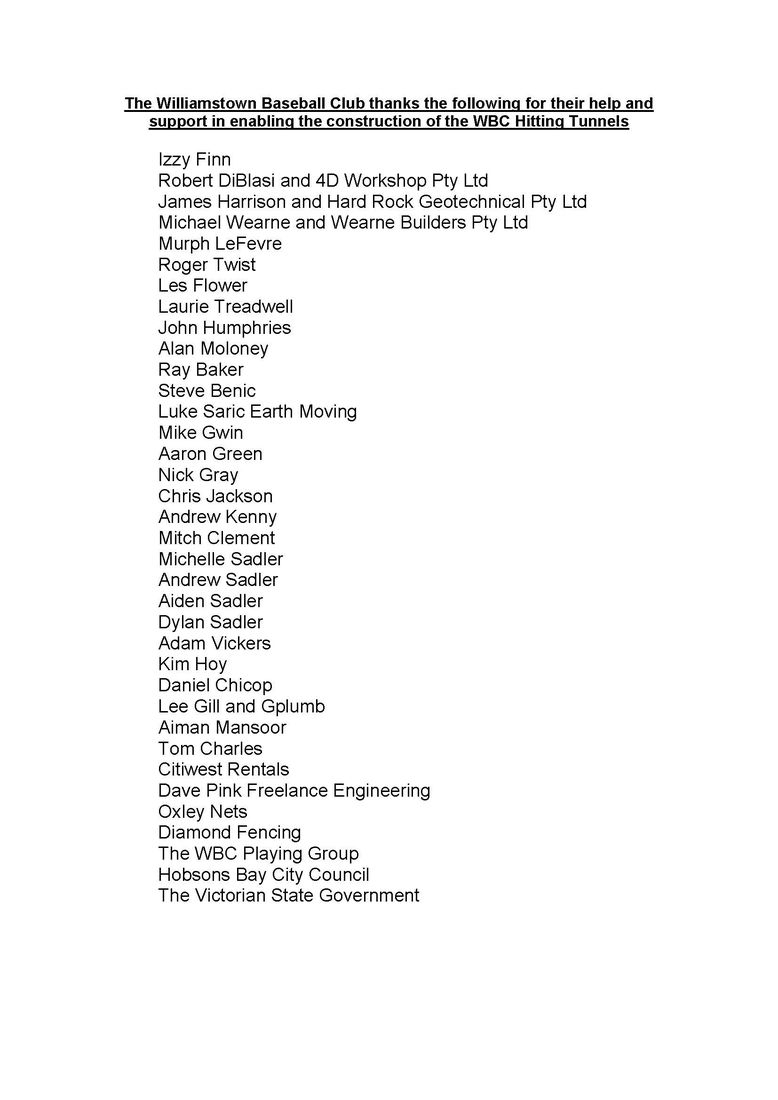